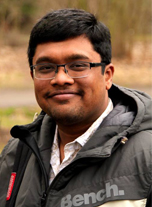 Microalgae are an essential part of the food chain as they contribute significantly to the global carbon fixation. To get a better understanding about this process, it is important to understand how microalgae respond to changes in environmental conditions. Earlier work on the marine diatom, Phaeodactylum tricornutum showed how this microalga responds to external signals such as temperature, osmotic stress and iron by altering its calcium homeostasis. However, very limited information is available on impact of such changes on freshwater microalgae. Using the freshwater model microalgae Chlamydomonas reinhardtii, we have established a transgenic reporter line for measuring cytosolic calcium ion concentration. We subjected this reporter line to changes in several abiotic and biotic factors and measured the altered calcium concentration. This work would be of great impact to understand the similarities and differences in the environmental sensing abilities of freshwater and marine microalgae as well as provide us with insights into mechanisms of interaction between microalgae and other microorganisms.