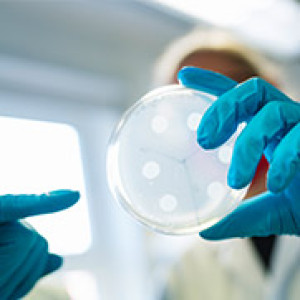 We are very happy that many ILRS doctoral researchers are among the awardees:

Christin Reimer and alumnus Johann Kufs, together with their co-authors, succeeded in producing active substances in the amoeba Dictyostelium discoideum. They created a hybrid enzyme from the cannabis plant and amoeba to produce a precursor of the cannabinoid tetrahydrocannabinol. The work was recently published in Nature Biotechnology.

Tongta Sae-Ong together with Amelia Barber, Bastian Seelbinder and colleagues defined the genetic diversity of Aspergillus fumigatus. The fungus causes life-threatening infections in humans. The research increased understanding of the differences between genetic lineages and reveals potential new targets for therapies. The study was published in Nature Microbiology.

Mario Krespach, Maria Stroe and colleagues investigated how multicellularity occurs in microorganisms. He found that certain toxins produced by bacteria cause the green alga Clamydomonas reinhardtii to assemble into multicellular structures. The results were published in PNAS and also recognized as a "research highlight" in Nature Chemical Biology.

Hannah Büttner and alumna Sarah Niehs also studied chemical warfare in microorganisms. Together with their team, they were able to show that the fungus Mortierella verticillata forms a symbiotic relationship with bacteria whose toxins protect it from a nematode. These results were also published in PNAS.

Sarah Niehs was also involved in the team around Lisa Mahler who, in turn, set out to find new antibiotic substances in natural microbiological communities. To do this, she has developed a new microfluidic method to cultivate previously unculturable microorganisms using tiny droplets. The work was published in eLife.

Congratulations to all recipients of the medac research award 2021!

To the press release: https://www.leibniz-hki.de/en/press-release/new-therapeutic-approaches-microbe-wars-and-new-ways-of-producing-active-compounds.html