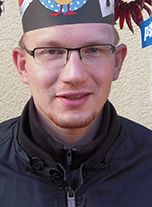 Millions of humans and animals suffer from superficial infections caused by ascomycete pathogens called Dermatophytes. These fungi are specialized on keratinized tissues and are, in opposite to the majority of other fungal pathogens, able to colonize immunocompetent hosts. As a representative model organism, the zoopathogenic species Arthroderma benhamiae was selected for genome sequencing and physiological, biochemistrial and genetic studies. With other Dermatophyte species, A. benhamiae shares the specialty to secrete substantial amounts of exoproteins, in particular proteases, during cultivation. Aims of this work are:

Secretome analysis: Cultivation of A. benhamiae under conditions which stimulate the secretion of exoenzymes and further separation and identification of proteins using 2D-PAGE and MS techniques.

Genetic modification: Selection of proteins assumed to have important functions during infection and generation of gene deletion mutants.

In cultures using keratin as the major carbon and nitrogen source, A. benhamiae secretes large amounts of proteins. The secretome mainly consists of hydrolases, especially proteases, and primarily small secreted proteins without an assigned function. For two cell-wall-associated proteins, a hydrophobin and an uncharacterised cell wall protein induced in keratin cultures, gene deletion mutants were created.