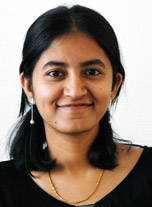 Terpenes are natural products produced by numerous plants and fungi, traditionally used as flavours and fragrances and are known to possess antibacterial and pharmaceutical properties. Indole terpenoids are derivatives of terpenes containing indole and prenyl moieties and have surprisingly diverse structures catalysed by terpene synthases/cyclases. While most of the information on these compounds and their corresponding enzymes are from eukaryotes, only recently the bacterial candidates have been discovered. Considering the diverse antimicrobial potential of these natural products, a detailed study of their biosynthesis with emphasis on the enzymes becomes necessary.

In my PhD project, I am looking into the biosynthesis of indole terpenoids from Streptomyces sp., and characterize the enzymes critical for the production of these compounds. The major aim of this project is to uncover the reaction mechanism which could be exploited for the synthesis of structurally diverse products. The knowledge of these proteins is fundamental for engineering several indole terpenoids in bacteria and also forms the basis of how these enzymes have evolved to generate natural products with such specificity and fidelity.