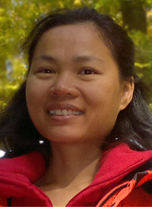 An endogenous clock allows plants to anticipate daily changes in abiotic stimuli, such as light and temperature, however, it is unknown whether the clock also allows plants to regulate interactions with microbial community, particularly pathogen community. Therefore, my current focus is to characterize the influence of circadian clock-related genes on N. attenuata´s microbial community structure and resistance against its native pathogens, using transgenic N. attenuata lines produced by irRNAi. Each line is silenced in one of different genes which are predicted to be related to several diurnal rhythmic traits of N. attenuata in nature.