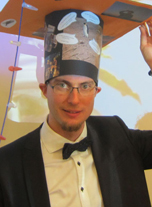 Microorganisms play an important role in most ecosystems. They are responsible for many diseases, but can also be beneficial or even essential for the fitness of many organisms. Rhizobacteria are abundant symbiotic partners of plants. They are known for their importance during the growth of plants and many so called plant-growth-promoting-bacteria (PGPB) have been identified. The wild tobacco Nicotiana attenuata inhabits the southwestern deserts of the United States and growths in hot and dry post-fire environments. The plant has to balance quick growth and strong defense utilizing the limited resources. Many ecological interactions have been studied for years, but yet the microbial influence on the plant has not been adequate analyzed.

Therefore plant-strain have been constructed overexpressing anti-microbial-proteins (AMP). These plants should have a greater resistance against pathogenic bacteria , but will also interfere with beneficial rhizosphere inhabiting bacteria. In this plant the balance between repelling pathogens and harming symbionts will be corrupted and the effect on the growth and the total fitness will be studied. Goal of this work is to characterize the microbial community and study its total fitness influence for Nicotiana attenuata in the wild.