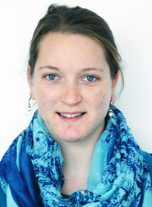 Genomics-guided discovery of natural products in a predatory bacterium

Predatory bacteria are capable to feed on other microorganisms. Available genome sequences show that they possess specific pathways for the biosynthesis of polyketides and nonribosomal peptides that are not found in other bacteria. Furthermore, there is growing evidence that the compounds secreted by predatory bacteria can contribute to their predatory activity, e.g. in the form of signaling molecules or antibiotics. From a pharmaceutical perspective, predatory bacteria are hence a promising source for finding new medicinal drugs.

In this project, the secondary metabolome of a Pyxidicoccus fallax strain will be investigated, which had been isolated from the shores of the river Saale and was found to exclusively prey on Gram-positive bacteria. Previous analyses of Pyxidicoccus fallax already led to the discovery of new macrolide antibiotics which, however, constitute only a part of the chemical arsenal of this strain. To track as yet overlooked secondary metabolites, genome mining strategies will be exploited.