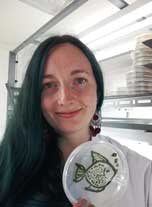 Exploring the Role of Light in Microalgal-Pathogen Interactions

Eukaryotic unicellular photosynthetic organisms (microalgae) are key contributors to CO2 fixation. Light plays a major role in their life as source of energy and/or as source of information for photosynthesis, their developmental cycles and the entrainment of their circadian clocks. The green biflagellate alga Chlamydomonas reinhardtii has severed for decades as a model to study light-driven reactions in microalgae. In C .reinhardtii, different sensory blue light receptors (phototropin, a plant and an animal-like Cryptochrome abbreviated as PHOT, pCRY and aCRY, respectively) are involved in the above mentioned processes (Petroutsos et al., Nature 2016; Zou et al., Plant Physiol 2017; Müller et al., Plant Physiol 2017). One of them, aCRY, is also able to absorb in the red region of the visible spectrum. Here, we want to study the potential influence of blue and red light on the interaction of microalgae with bacteria taking C. reinhardtii and Pseudomonas species that markedly inhibit algal growth as model (Aiyar et al., Nat Commun, 2017). In nature, microalgae are usually associated with other microorganisms and these interactions can be beneficial for both organisms or antagonistic. Despite the importance of such interactions, relatively little is known about abiotic factors such as chemical mediators or the influence of light shaping microalgal communities. In higher plants, it has been shown recently that blue- and red-light receptors from Pseudomonas are relevant for plant-pathogen interactions. Here, we aim to study if algal and/or bacterial blue- and red light receptors play a role in the microalgal-bacterial interaction. Therefore, we will use photoreceptor mutants of C. reinhardtii and Pseudomonas. The interactions will be analyzed in a light-dark regime, under constant darkness and constant light as well as under different light qualities and quantities, representing different environmental conditions. Our studies will allow us to visualize the role of light in microalgal-pathogen interactions.